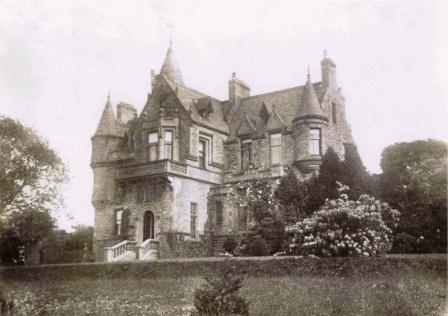 This article is from the publication ‘Postscipt to the Past’. ‘Lost Mansions and Houses of Renrewshire’. It is reproduced here with the kind permission of its author Dan Sweeney.

The town of Johnstone developed on the back of the thread and cotton mills built on the banks of the Black Cart River to the north of the town. In 1825 there were about 13 mills in the Johnstone area. One of the earliest was the Cartside Mill, built in 1794 under the direction of the successful cotton spinner Robert Burns, whose partners in the venture, William Macdowall of Garthland and George Houston of Johnstone, had earlier been responsible for a cotton mill at Lochwinnoch in 1788. A large, 6-story building, Cartside Mill was considered one of Scotland’s finest, early water-powered cotton mills. The original Cartside House, a compact 8-room structure with servants’ quarters, standing a short distance east of the mill on high ground on the south bank of the Black Cart, was built about this time for the mill manager. It appears to have become a temporary home for the Napiers of Milliken after 1801, when the old house of Milliken was destroyed by fire. Colonel Robert Milliken Napier (1765-1808) made Cartside his home in 1802 on his retiral from the army. He had entered the British Army in 1779 and over the following twenty-two years saw active service in Holland, Ireland, the West Indies and India, where he commanded the siege of Mangalore. Obliged to retire from military service due to the severity of wounds received in battle, he died at Cartside House in February, 1808.

The original mill partnership, Houstoun, Burns and Company, was dissolved with the death of George Houston in 1815, and the mill, house and 19 acres of Cartside became the responsibility of his second son William, who operated the business as George Houston and Company. William Houston (1781-1856) lived in Johnstone Castle with his elder brother Ludovic, who had become laird in 1815, before moving to Cartside House shortly after his marriage in 1845. His elder son George Ludovic Houston, who was to succeed his uncle as laird of Johnstone in 1862, was born at Cartside in 1846, Houston extended the mill, making an addition in 1825 which nearly doubled its size. In additionto being a successful cotton-master, Houston is credited with transforming canal travel in the 1830s. previously unacquainted with boats and untutored in boatbuilding, he designed swift, iron boats which were introduced as passenger vessels on the Glasgow, Paisley and Ardrossan Canal, which had opened in 1809. Pulled along at twelve miles an hour by a single horse, the enabled the canal company in 1839, when there were 13 boats sailing daily between Glasgow and Paisley, to carry over 400,000 passengers, twice as many as were transported on the Forth and Clyde Canal. The business flourished only for a very brief period, however, declining rapidly after a faster and more convenient mode of travel arrived with the opening of the Glasgow and Paisley Joint Railway in 1840.

After Houston and his family moved to Johnstone Castle in 1862, Carside House, with about 8 acres of polices, was regularly leased out. From 1862 it was occupied by the Glasgow East India merchant Archibald Glen. Following losses in his business with Singapore, Malaya and the Philipinnes, Glen went bankrupt in 1874 with liabilities of £150,000, and died at Cartside House in December, 1875. Around 1877 the paper manufacturer Peter McLaurin moved into the house with his family. McLaurin in 1849 had founded the Glasgow firm Smith and McLaurin, which pioneered the manufacture of gummed paper. In 1869 he had purchased the Houston’s Cartside Cotton Mill, which he converted into a paper mill to produce a wide range of paper products – gummed tape, pasteboards, cardboard and label cloth paper suitable for envelopes and books. Shortly after moving into the mansion, in December 1878, a fierce explosion shook the house. The gas boiler in the kitchen exploded after a feed pipe which had frozen in a severe frost thawed, sending a stream of cold water rushing into the heated and empty boiler cylinder. The kitche, which was occupied at the time, was badly damaged, with the ceiling and windows destroyed, walls split and part of the kitchen wall thrown across the room. The cook died in hospital, while two of McLaurin’s children were severely burned. This accident may have been the catalyst for McLaurin’s rebuilding of Cartside House in 1881, in Scottish Baronial style to designs by Paisley architects Andrew Robb Scott and John Albert Rennison.

Peter McLaurin had nine children, three of whom emigrated in the late 19th century to the United States, where they established a successful paper business. After McLaurin’s death in 1909 one of his sons, Duncan McLaurin, returned to join his brothers in the family business. He was living at Cartside House in 1914 with his widowed mother and his brother Alexander.

In 1931 Johnstone Town Council, driven by the housing needs of the Burgh, acquired Cartside House and the grounds for housing, and the following year extended the burgh boundaries to include the property. Five years earlier it had purchased neighbouring Linn House and policies, and now brought forward proposals to build 220 houses for over 900 people on the joint 32-acre site. Cartside House, which had stood at the junction of Cartside Avenue and Beach Road, was demolished soon after.

The McLaurin family sold the business in 1964 to the Guardbridge paper company, from whom it was purchased in 1984 by the James River Corporation, an international force in the paper industry. Smith and McLaurin remains a leading manufacturer and global supplier of paper products. The Cartside Mill, including the original 1794 block, was demolished in 1992. A two-storey stone structure, the last remaining fragment of the works complex, continues to serve as an office block for the company.
Home • Research • Contact