Johnstone History Museum
A Project of Johnstone History Society • Scotland
Jane's search for the story behind the name Frank Downs
By Jane Cassidy
July 12, 2018
FRANK Downs. The name jumped out at me from the war memorial at Ayr train station. My father’s name but this wasn’t him. Did I have a connection to this other Frank? I would find the answer quite quickly and in doing so discover that Johnstone is far more to me than a place I passed through on the train most days. 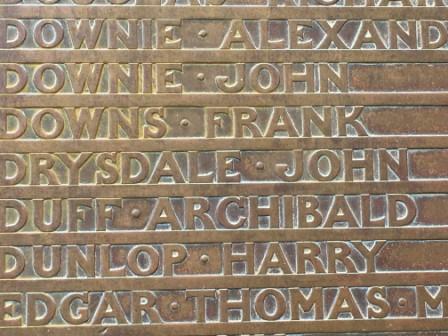 Close-up view of memorial plaque.
When I saw Frank’s name, I had not long returned from Poland, where I visited the former site of the prisoner of war camp Stalag 8B. My father spent two years there during the Second World War. I had used the Commonwealth War Graves Commission to trace the grave of his friend, so went straight to its website in the search for Frank.

The result stunned me. Lance Cpl FE Downs, B Company, 9th Battalion, Highland Light Infantry, was “the son Jane Callen Downs and the late Samuel Downs, of Station Cottage, Johnstone, Renfrewshire”. I recognised these names – they were my great-grandparents.

Samuel Downs and Jane Callen moved to Scotland from Ireland and were married in Kilbarchan in 1877. At the time of the 1881 census, they were living at 91 Thornhill, Johnstone, with their daughter Sarah, but the family home became Station Cottage, 12 Thorn Brae, Johnstone. Samuel and Jane lived there until their respective deaths in 1902 and 1936 and had a total of 13 children, including my grandfather, also Samuel.

Samuel Snr was a railwayman, a points man and signalman. Several of their children also worked on the railways, Alexander, James – and Frank, full name Francis Eliot. The war memorial at Ayr train station records the names of employees of the Glasgow and South Western Railway who gave their lives in the “Great War”. It previously stood at the old St Enoch Station in Glasgow, demolished in 1977.

Frank was killed in action defending one of the canals in Ypres on July 16, 1918¬ - the day after his 26th birthday. His unit’s war diary states it had been a quiet day but in the evening the battalion came under heavy artillery fire and a shrapnel shell burst at B Coy headquarters.

Francis Eliot Downs is buried at Nine Elms Cemetery in Poperinge, Belgium. Four and a half months after Frank’s death, his brother Samuel and his wife Margaret (nee Paterson) had a son – my father. They named him Francis Eliot Downs.