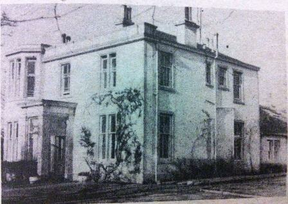 Fordbank House. Private home, later maternity hospital.
Fordbank House was built on the lands of Little Corseford, being part of the 40s land of Corseford.

Its genesis came about 1856-57, when James Richardson of Ralston, a wealthy sugar merchant in Glasgow acquired the estates of Caplaw and Hallhill on the extreme east of the parish of Lochwinnoch.

In January of 1858 he added the small farm of Little Corseford to his land holdings. In November of that year he feud a plot of these lands, 1 acre and 32 poles, to James Christie.

James Christie was employed as cashier to James Richardson & Co Merchants, Glasgow. Originally from Fife, he was resident at Hillhead in Glasgow in 1858, by 1859 he was living at Fordbank Villa.

By 1863 James had went into business own his own account, forming James Christie & Co. (Sugar Merchants) with offices in Virginia Street, Glasgow. The following year he was in partnership with an Edinburgh Merchant, James Bowe, trading as Bowe & Christie, Sugar Merchants, North Bridge Street, Edinburgh.

James Christie was not a success in business. In June of 1870 the stoppage was reported of Messrs James Christie & Co of Glasgow, in the sugar trade, with liabilities estimated at £8,000 to £10,000.

The new owner was William Blackburn Craig, a dry-salter and oil merchant in Glasgow. In the years 1870 to 1873 he was involved in erecting additions and alterations to his premises in St Vincent Street as well as the erection of new buildings. He may have overstretched his finances, by March 1873 Fordbank House was once again up for sale.

The Notice of Sale give a full description of Fordbank House at that time.

3 Public Rooms, 5 Bedrooms, Bathroom, Pantry, Kitchen and Servants accommodation. There is a Byre, Stable, Coach House and other Outbuildings; also a Porters Lodge. The ground extends to about 10 acres enclosed.
The next owner and occupier was James Stewart, another Glasgow merchant, sometime foreign and colonial merchant. By 1885 the house and grounds were in possession of heritable creditors and the house was occupied by Henry David Crailsheim, as tenant

Henry David Crailsheim was born in Glasgow of a German father and a Belgian mother. He, his wife Maria and son Harry had only recently left Dunblane, their son Edward was born at Fordbank abt. 1888. The family were co-partners in the firm of Crailsheim & Herman, Foreign and Colonial Merchants, in Glasgow. By 1891 they had left Fordbank House and were resident in Lochridge House, Stewarton, Ayrshire.

Alexander Fullerton, Engineer and Ironfounder, next took ownership and occupation of Fordbank, sometime prior to 1891. He was born in Paisley, son of Alexander Fullerton, a partner in the Paisley shipbuilding company of Fullerton, Hodgart and Barclay. He continued with the company after his father retired in 1885.

Alexander was unmarried, as were his four sisters who shared the house with him. When he died in May 1911, Fordbank House was again up for sale.

Mrs Parsons was an enthusiastic supporter of the Lanarkshire and Renfrewshire Hunt. She bred horses, hunters, with great success, and presumably was instrumental in erecting the stables to the rear of the house which are still in use today under the ownership of the Fordbank Livery and Equi Centre.

With the coming of war in 1939, Fordbank was made available to the Public Health Dept. of Renfrewshire County Council, and used as an annex to the Thornhill Maternity Hospital. Strangely, it was known as the Gryffe Hospital, Kilbarchan.

Major Parsons died in August 1946, his wife Marion about 1948. The Property was once again on the market. The Stables were sold by October, the rest of the estate was acquired by the Welfare Services Committee in November 1948.

It was purchased at a cost of £4,000, including 7 acres and a lodge house, also the lease of the gardeners cottage at £35 per annum. Total cost estimated at £15,000 for furniture and fittings. The work was undertaken by J.Y.Keanie Ltd. of Johnstone.

It was officially opened on 19th May 1950 as an old peoples residential home with accommodation for 30 occupants, the first of whom were expected to move in the following week. It was the first home of its kind to be completed in Renfrewshire.

The opening ceremony was attended by 27 local dignitaries including Mr Norman Keanie, 27 other invitations were declined. The opening was performed by Baillie P. R. Jacobs, chairman of the Councils Welfare Services Committee. Afternoon tea was provided by Mr Jas. R McKay, The Clock Café, Thornhill.

Fordbank House continued as a home for old folk for 27 years. In September 1977 the authorities in the Social Work Dept. decided to transfer the residents to Stewart House, a purpose built home in Renfrew.

This caused outrage to many Johnstone residents, particularly as Fordbank was then to provide accommodation for 38 homeless men when it re-opened in January 1979

The Building was declared surplus to requirements by the Councils Social Works Dept. in May 1993, the residents were re-located and by September Fordbank House was closed.

In December1994 Strathclyde Region were expecting to have sold Fordbank House to a businesswoman, Mrs Maria Sutcliffe, for around £200,000 by the turn of the year. It was understood that Mrs Sutcliffe was acting as an individual buyer and not as part of a bigger company.

The house was eventually demolished, the site cleared and is now a Private Housing Estate.