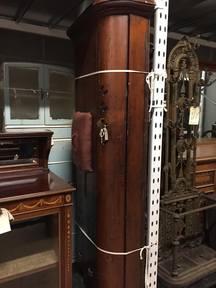 The normal procedure regulated in Scotland under Section 74 of the Prisons (Scotland) Act 1860, was for a boy to be laid on a form, with 2 police officers sitting astride, one holding his elbows and the other his feet, while a 3rd officer administered the punishment. Eventually, benches or tables or strapped devices were used to secure the boys being birched, which reduced the number of police officers required to carry out the sentence. A police surgeon medically examined each boy and only those physically fit were birched.

According to Home Office regulations, a judicial birching was to be carried out in the police cells or courthouses. It was to be sufficiently severe to cause a repetition of it to be dreaded. The birch rod, which was to be applied “across the bare flesh of the buttocks” was not a rod but a bundle of twigs resembling a gardener’s broom. The birch was soaked in water so that the twigs would not break off during use.

Every birch was made according to careful specifications carried out by the Home Office, and was inspected and approved by the Sheriff.

Johnstone, being a police burgh, had its own police force, the Johnstone Burgh Police, with Court Hall and Office, including police cells, in Collier Street. Under Section 514 of the Burgh Police (Scotland) Act 1892, powers were conferred on the Burgh Magistrates of the town, to allow whipping of boys under 14 for any offence punishable by imprisonment, or fine with the alternative of imprisonment, the police carrying out the sentence imposed at the Burgh Court.

On 15th May 1930 Johnstone Burgh Police amalgamated into Renfrewshire Constabulary and birching continued to be carried out. Indeed the Chief Constable of Renfrewshire Constabulary, which included Johnstone, John Robertson, was an advocate of this form of punishment. In fact the matter was raised in Parliament with regards to Juvenile Court birching as reported in Hansard, 23 November 1943, when Sir Frank Sanderson asked the Secretary of State for Scotland what action he proposed to take about the statement made by John Robertson, Chief Constable of Renfrewshire at a youth conference to the effect that he would use a green (fresh from the tree) birch on offenders and cut them with it. The reply came that it was the responsibility of the Sheriff to approve the instruments of punishment, not the police, and the opinions of the Chief Constable were open to the misunderstanding of his powers and responsibility, and he had so been informed.

This form of juvenile punishment was abolished by the introduction of the Criminal Justice Act introduced on 30th July 1948.

One more point worth mentioning is that it appears that the Magistrates of Johnstone Town Council, having been given powers at the Police Court to birch juvenile offenders, were not in any hurry to use them. It was apparently felt that showing the offenders the apparatus was enough. This was to change in response to a rise in juvenile crime in 1903.

The Paisley and Renfrewshire Gazette of Saturday, 9 January 1904 published the Johnstone Police Report headed “Decrease In Crime.” It stated that “Detective Sergeant Husband (of the Johnstone force) has compiled the Police Report for 1903, with regards to juvenile offenders, the number convicted under 16 was 43, a decrease of 26 compared with e previous year (1902). The decrease in these offences is no doubt due to the birch rod having been introduced early in the year (1903). The rod has been used on 4 occasions.”

The Lincolnshire Echo, Saturday, 24th January 1903 reported the following under the heading “Birch Rod Apparatus” - In fulfillment of a resolution to try the birch rod on a certain class of juvenile offenders the Johnstone Town Council have invited Sheriff Lyell (Paisley) to inspect the arrangements made and give sanction thereto. A formidable apparatus has been erected in one of the police cells, to which it is intended to fasten the culprit while undergoing castigation.

The Paisley and Renfrewshire Gazette of Saturday, 24th January 1903 published the following with regards to “Johnstone - Institution of the Birch” - On Wednesday afternoon, 21 January 1903,, Sheriff Lyell. Inspected the apparatus which has been introduced for the whipping of juvenile offenders. The apparatus consists of a press like erection (whipping post), on the bottom board of which the culprit stands. Holes are pierced at convenient distances for straps to confine at the wrists, ankles and knees, and a sliding cushion in the centre prevents injury against the hard surface while the whipping is taking place.

The Sheriff inspected it and gave his approval. It was first used as mentioned in the Paisley and Renfrewshire Gazette, Saturday, August 15, 1903 - Johnstone - Three Boys Birched.

At the Police Court on Tuesday, 11th August 1903 before Provost Lang and Bailies Daly and Coates - three boys, Peter McNamee, John MColgan and Michael McGinley, all residing in McDowall Street, were charged with malicious mischief and destroying property. The Fiscal asked the Magistrates to apply the birch rod with a view to putting down the large number of complaints against boys in the town. As the apparatus had been erected by the Council and sanctioned by the Sheriff, the Magistrates ordered that the boys should be birched - six stripes (strokes), one three, one one respectively. The Burgh Medical Officer was sent for and the punishment inflicted accordingly. There was a large crowd outside the police station.

The apparatus is now in the Paisley Museum store, High Street, Paisley, a grim reminder of those days when corporal punishment was in force.
Home • Research • Contact